Our second launch was a bust (pardon the pun). Mission LE-2, used the same payload, but with a larger 600g balloon from Kaymont (http://kaymontballoons.com/), as opposed to the smaller 200g balloon we used on the LE-1 mission. This flight was targeting about twice as high as LE-1, to 94,000 feet.

The predicted path, shown above, had a nice launch site near town, an easy drive down the interstate, and a good landing site. It really was just too easy. 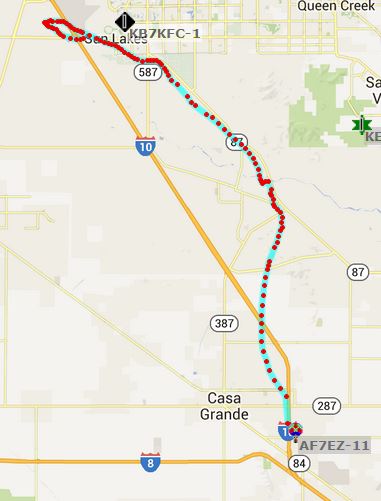 The above pic is the actual path, as shown in real-time at http://aprs.fi while the world (well, a few folks anyway) watched. The balloon reached 90,499 feet just before burst. We probably put a bit extra helium in this time, so it did not go quite as high as planned. However, 90Kft is pretty cool! 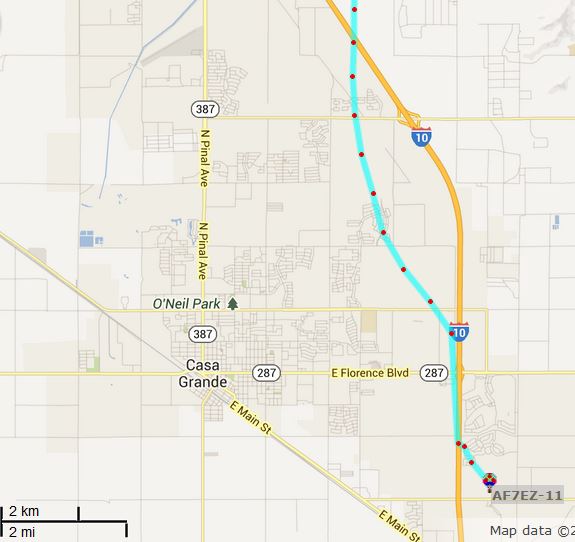 Here is a closer look at the end of the tracking data — just after burst, we got one GPS report as it descended to 87,678 feet, and then lost tracking data for five minutes (the blank part of the line along I-10). We were quite concerned at this point, but then the data came back at 59,619 feet, and we breathed a sigh of relief. Sadly, it was to be a short-lived relief, as there were only four final data points before we lost transmissions completely. The final reported altitude was 48,300 feet. It seemed to be reasonably on track with the predicted path, so we searched the target landing area, but we never did find the payload. The last known position was simply far too high to be able to narrow the search area enough for a chance at recovery. We had a ground beacon frequency, on which we listened as we drove around, but if we had an electronics or battery system failure, the beacon would not be transmitting either. There is a very slim chance that someone will find it and call the phone number on the outside of the payload, but it is officially lost at this point. We had a failure of some critical component, probably battery or gps, and did not have a redundant tracking system. That was an expensive lesson.