Our third launch was a success! Mission LE-3, used a new payload, and a 600g balloon from Kaymont (http://kaymontballoons.com/). Our new payload was heavier, with an Arduino Mega as before, a new custom interface board (shield) for gps/sd/sensors, a heavier camera, two APRS (Automatic Position Reporting System) transmitters, two RDF (Radio-Direction-Finding) ground beacons, and three battery systems with switching regulators. Payload weight was now 2.6 pounds — the balloon had to lift 2.8 pounds including a four-foot Rocketman parachute (http://www.the-rocketman.com/recovery.html). Our previous payload was 1.7 pounds and used a three-foot chute. As before, we used a dowel jack design for the antenna frame, this time making two axes into 2m dipoles (one for the primary 2m APRS tracking transmitter, and the other for the primary 2m RDF beacon transmitter).

The predicted path, shown above, was reasonable, and the weather was great! However, the balloon was not filled to the expected volume, as the helium tank was emptied out. Neck lift seemed correct, but apparently we were about 10 cu-ft short, which lengthened the flight considerably.

The LE-3 flight had a duration of 244 minutes (4 hours, 4 minutes), and traveled 97 miles (launch-to-landing) from Gila Bend to near Kearny; the actual path from the APRS data displayed on http://aprs.fi/ is shown above. After 210 minutes of slow ascent, the balloon finally burst at approximately 92,000 feet. The descent was much faster than expected, and it dropped from 92,000 to 3484 feet and landed in only 34 minutes! The initial segment of descent down to about 40,000 feet averaged about 65 ft/s (45 mph), but by landing the rate slowed to about 26 ft/s (18 mph). This was faster than expected with the 4-foot rocketman chute, but the payload landed with only one broken dowel leg, so we can’t complain (a slower descent would have pushed it into even nastier terrain for recovery).

First, a great big thank-you to Byon and Allen at Byonics (http://byonics.com/), who loaned us the tracking and RDF transmitters. Allen offered lots of advice on antennas and batteries. Byon, is an expert on RDF searching (and runs monthly “fox-hunts” here in town), and came out to help chase the balloon, and brought all his RDF and other amateur radio gear.  In the main payload box, attached to the jack antenna frame, we used a Byonics MT-400 400mW APRS primary transmitter, and a Byonics MF-15 15mW beacon for RDF searching on the ground. In a secondary payload box, suspended a few feet below the main payload, we had an independent secondary 2m APRS tracking transmitter — this was a Byonics MF-15, loaded with firmware for APRS operation instead of beacon use. This tracker only transmitted with 15mW, but was easily received from 90,000 feet below!

And we are off! Outside air temperature was 70F (21C), air pressure was 13.7 psi, and Relative Humidity (RH) was 14%. Our payload had been turned-on, sealed-up, and running for about an hour, and the internal payload temp was a toasty 91F (33C). This payload box had 1.5″ walls and smaller holes to the outside, so we expected it to stay much warmer than our previous payload box (and it indeed did). 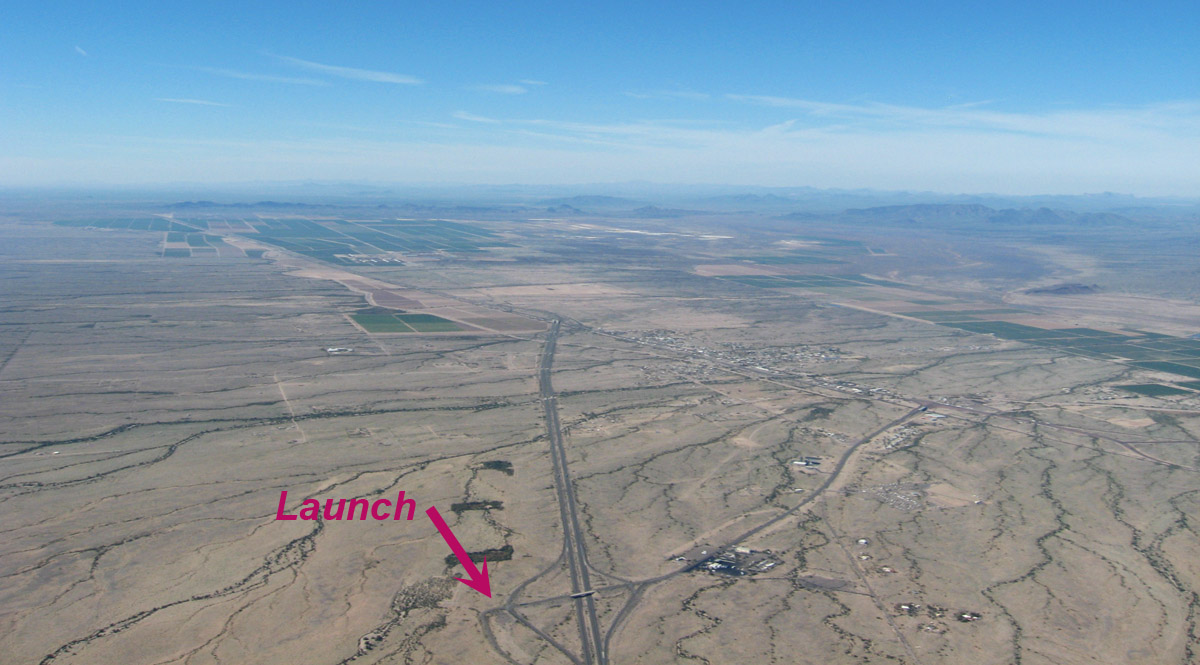 The weather was just perfect and cloud cover was very low, so we got great pictures from aloft. Here we are at 4800 feet MSL (Mean Sea Level, which is the altitude reported by the GPS) looking at Gila Bend. Since ground level was about 800 feet MSL, the balloon is now about 4000 feet AGL (Above Ground Level). This was at about ten minutes after launch. Outside air temperature was 73F (23C), air pressure was down to 12.3 psi, and RH was 7%. This is looking east over the town of Maricopa, at 25 Kft and 72 min. 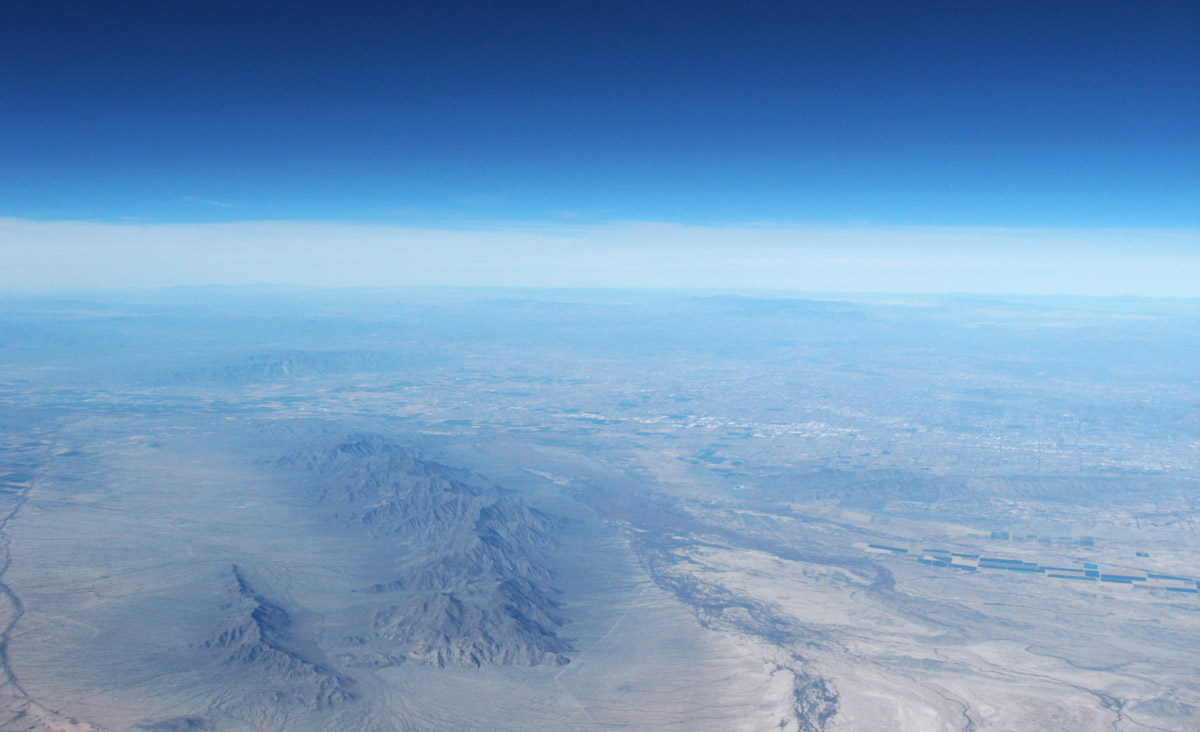 Looking at Estrella Mountain from 30 Kft at 85 min.

Facing northeast, we see Queen Creek (left) and San Tan Valley (right). This is at 32 Kft and 90 min. See the airliner at the top? In twenty minutes we will be higher than she can go.

Looking southeast down the I-10, we see Eloy, from 33 Kft at 94 min. Somewhere down there near Eloy is our lost LE-2 payload. Our poor little payload is lonely and cold at night, and wants to come home. If you find it, let us know. 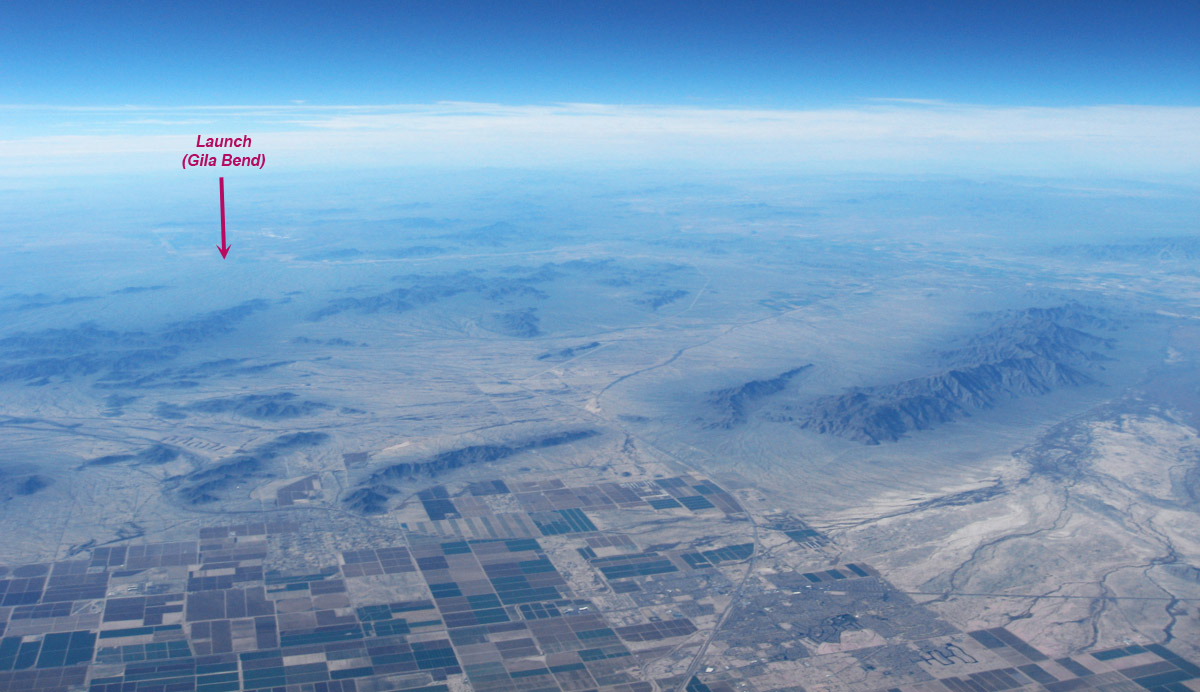 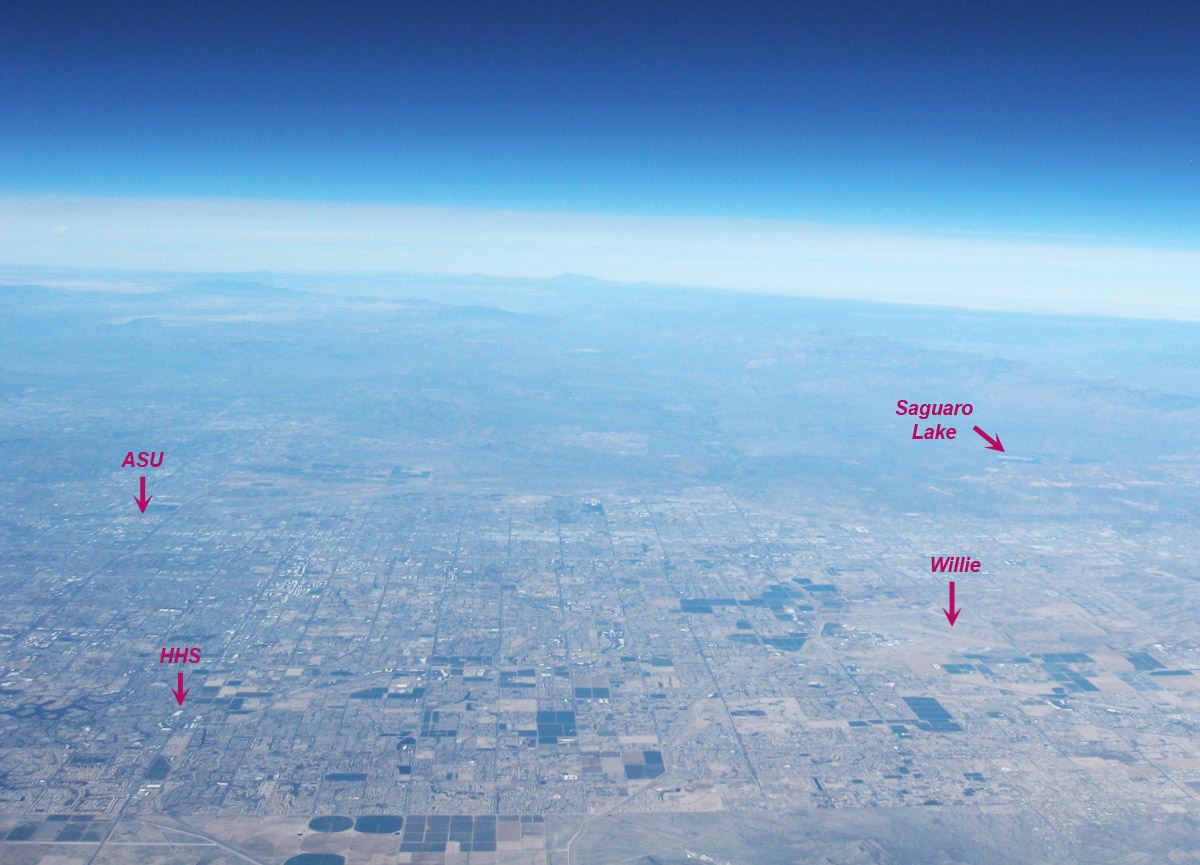 Peeking north, we see Chandler on the left (Tempe and Phoenix behind it) and Gilbert and Mesa on the right, from 35 Kft at 99 min. If you look carefully, you can see kids waving from Hamilton High. They renamed the old Williams Air Force Base to Phoenix-Mesa Gateway airport, but it will always be Willie to me.

From 40 Kft at 111 minutes, and looking east, we see the Gila River, the gigantic Ray (open-pit copper) Mine, the town of Kearny to the right of the mine, Pinal Peak (which has the KD7DR-3 APRS digipeater), the San Carlos Reservoir, the spot we will eventually land, and the Florence-Kelvin (dirt) Highway that we used to get there. We are now above airliner cruise altitude, which is about 30 to 40 Kft (9 – 12 km). The tropopause (the boundary between the troposphere and stratosphere) is also at about 40 Kft (12 km) for our Phoenix latitude. 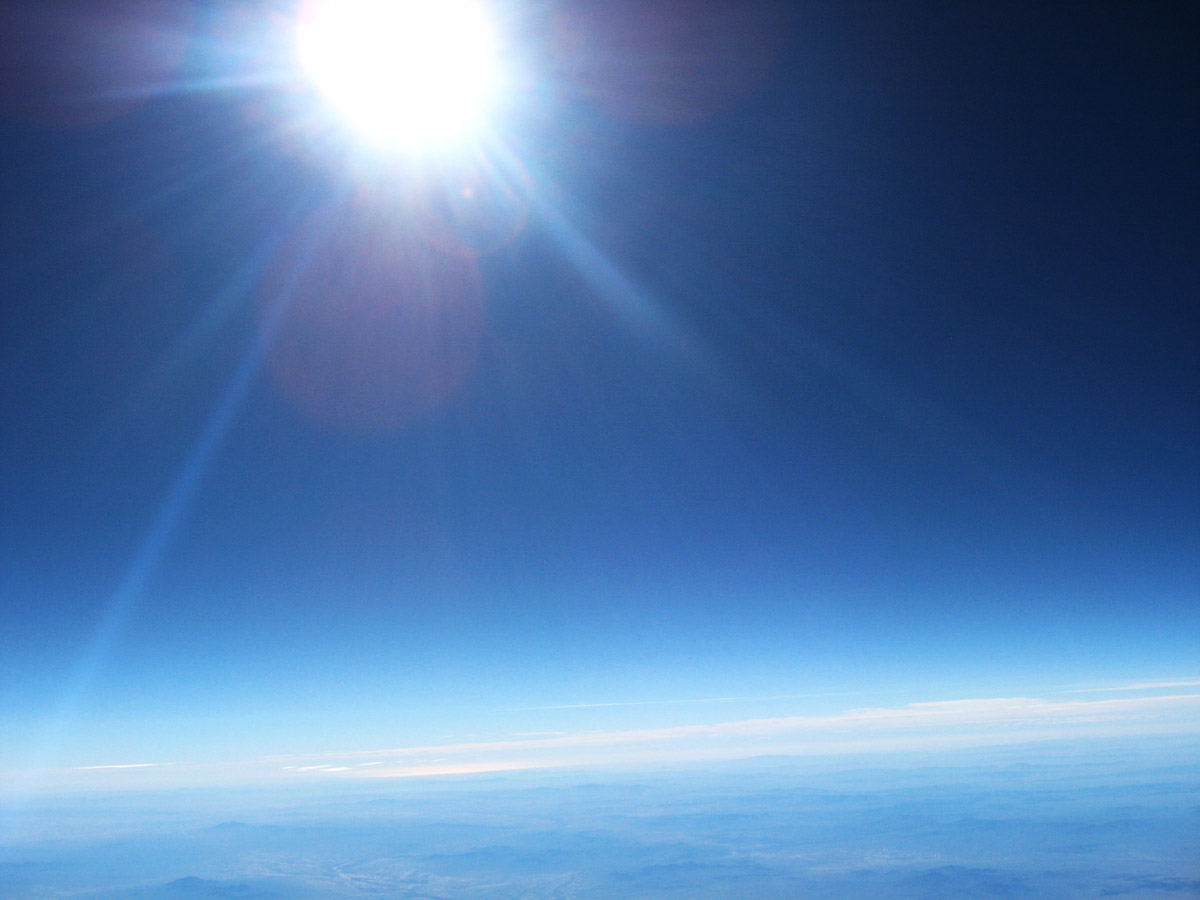 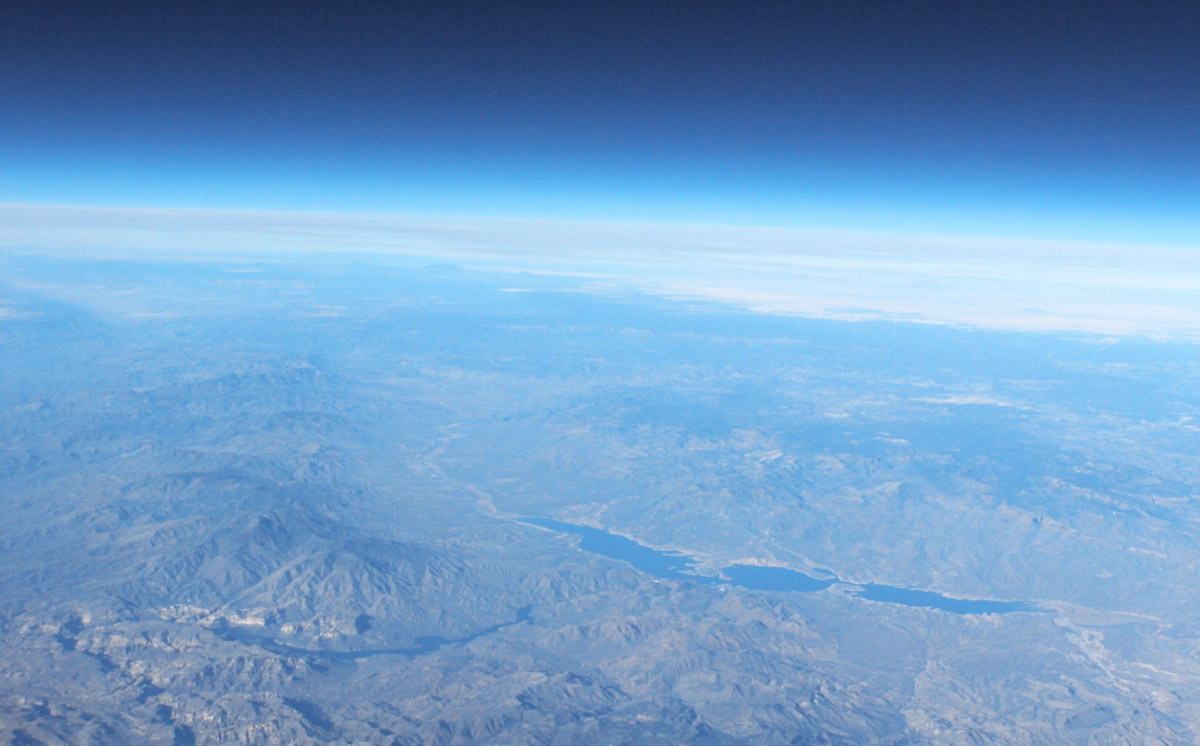 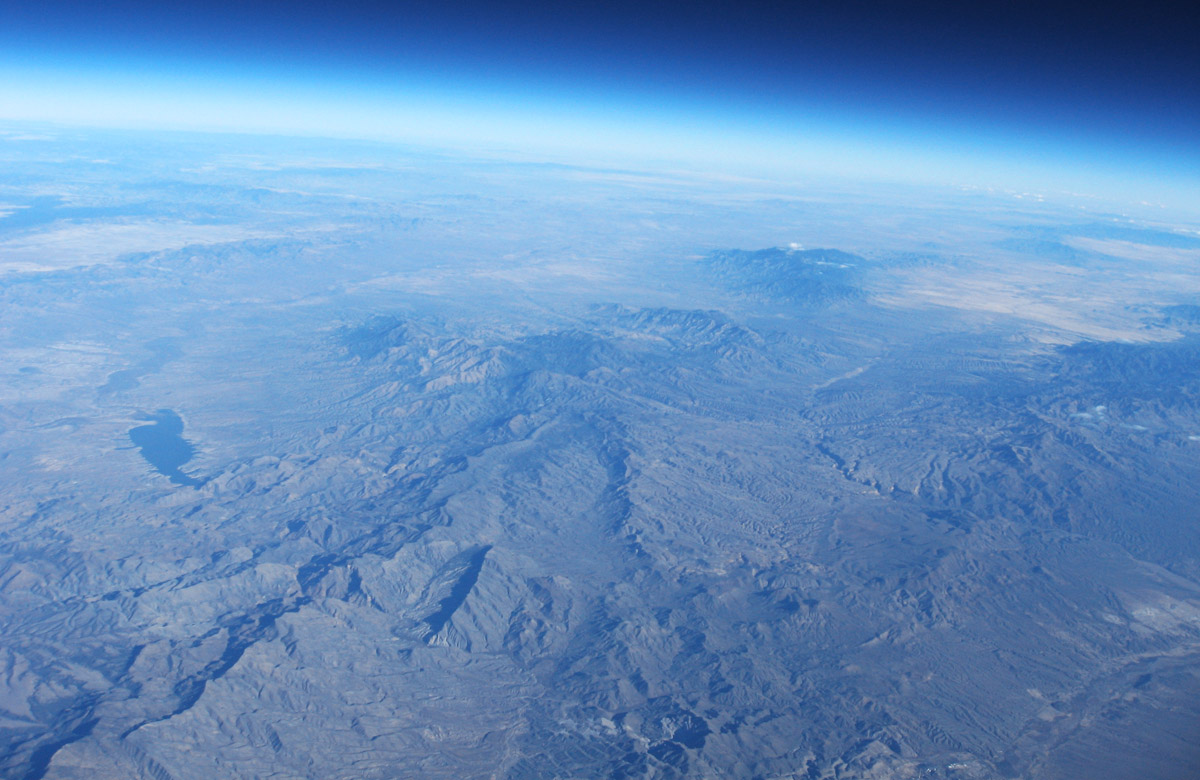 San Carlos Reservoir from 60 Kft at 149 min. We are now above the 59 Kft (18 km) cruise altitude of the supersonic Concorde, which used to zip along at Mach 2. Outside air temperature was 12F (-11C), air pressure was 1.2 psi, and RH was 1%. Inside our styrofoam payload box, it was a comfortable 46F (8C), keeping our electronics, and especially our batteries, quite happy. 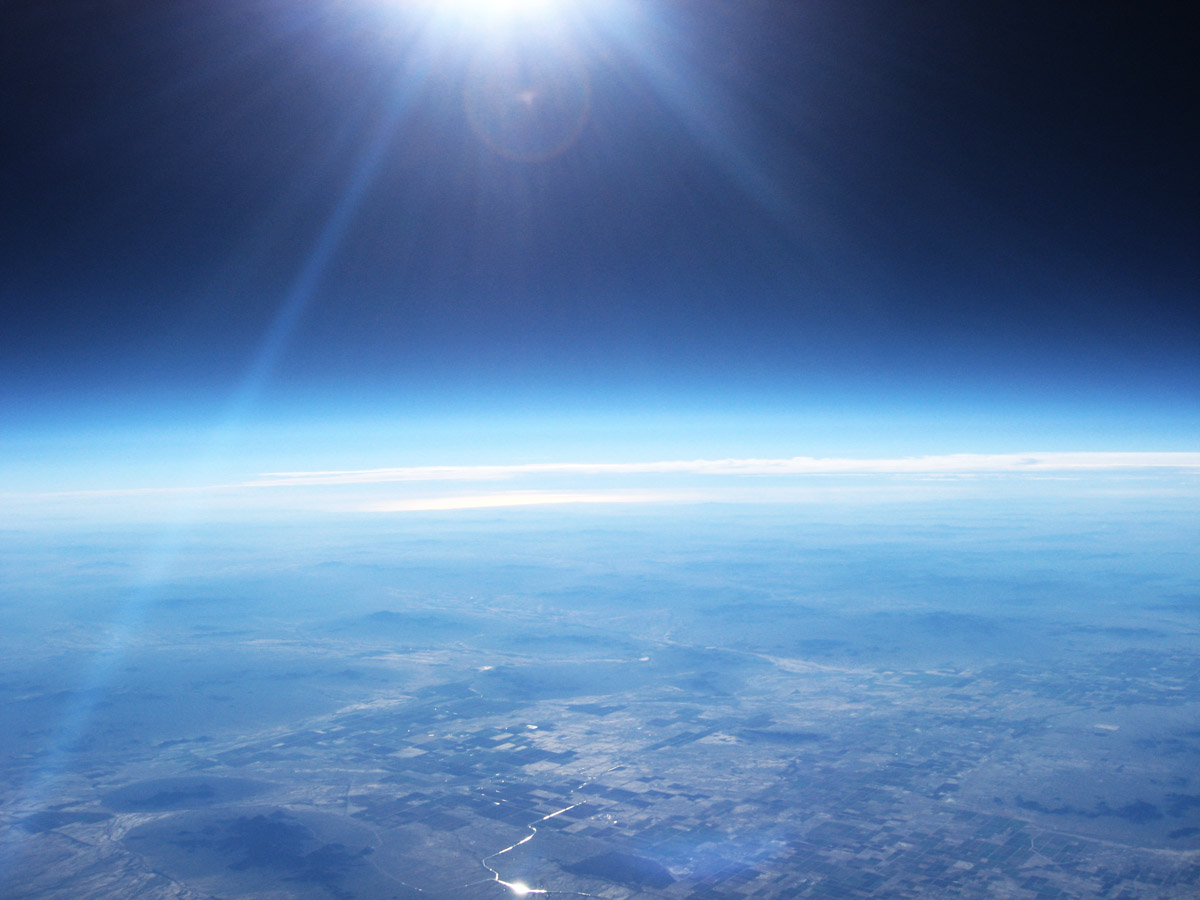 80 Kft at 184 min. The atmosphere layer looks much thinner, and space is looking quite black now. 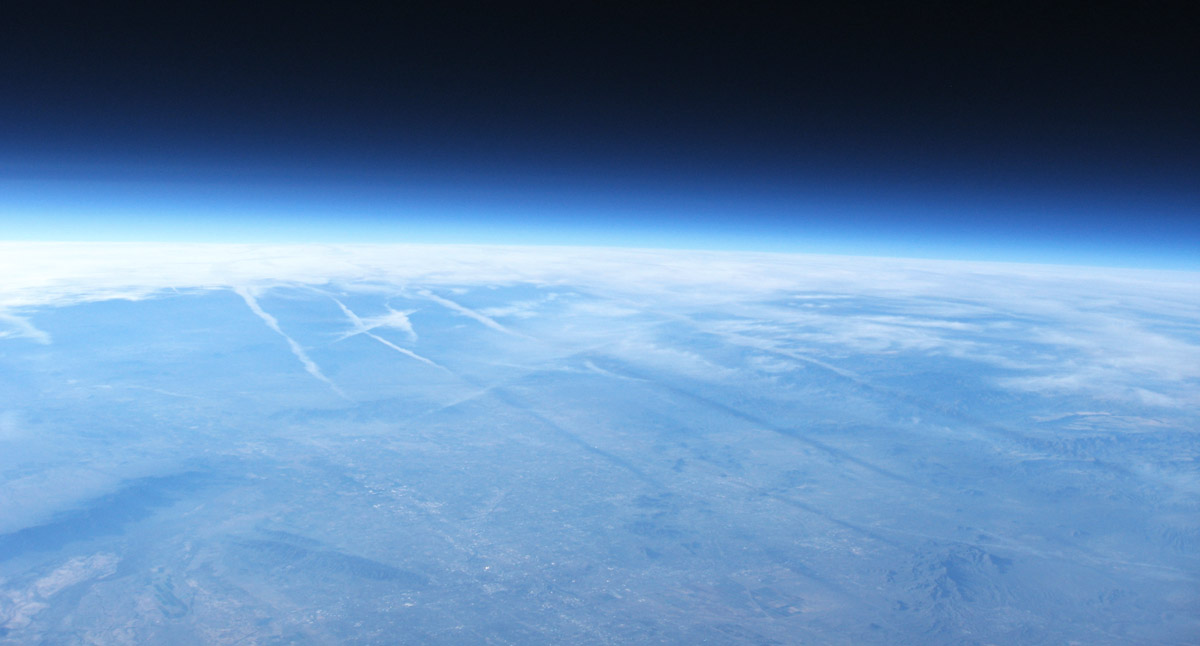 See the decaying airline contrails? This is at 88 Kft and 201 min. We are now above the cruise altitude of the SR-71 Blackbird, which tooled around at about 85 Kft (26 km), at a pokey Mach 3. Both the SR-71 and U-2 planes were from the very cool Lockheed Skunkworks, back when engineers just needed a pencil and a slide rule. We just saw an SR-71 down at the Pima Air Museum a couple of days before this launch.

The balloon just burst, at a diameter of about 20 feet, and the payload is now tumbling back towards Earth. Later, we found that, probably during this tumble, the string holding the secondary payload wrapped around one of the antenna jack legs, pulling down on it so the camera was mostly facing blue sky on the way down — but it did bounce around enough for a few pics during descent. 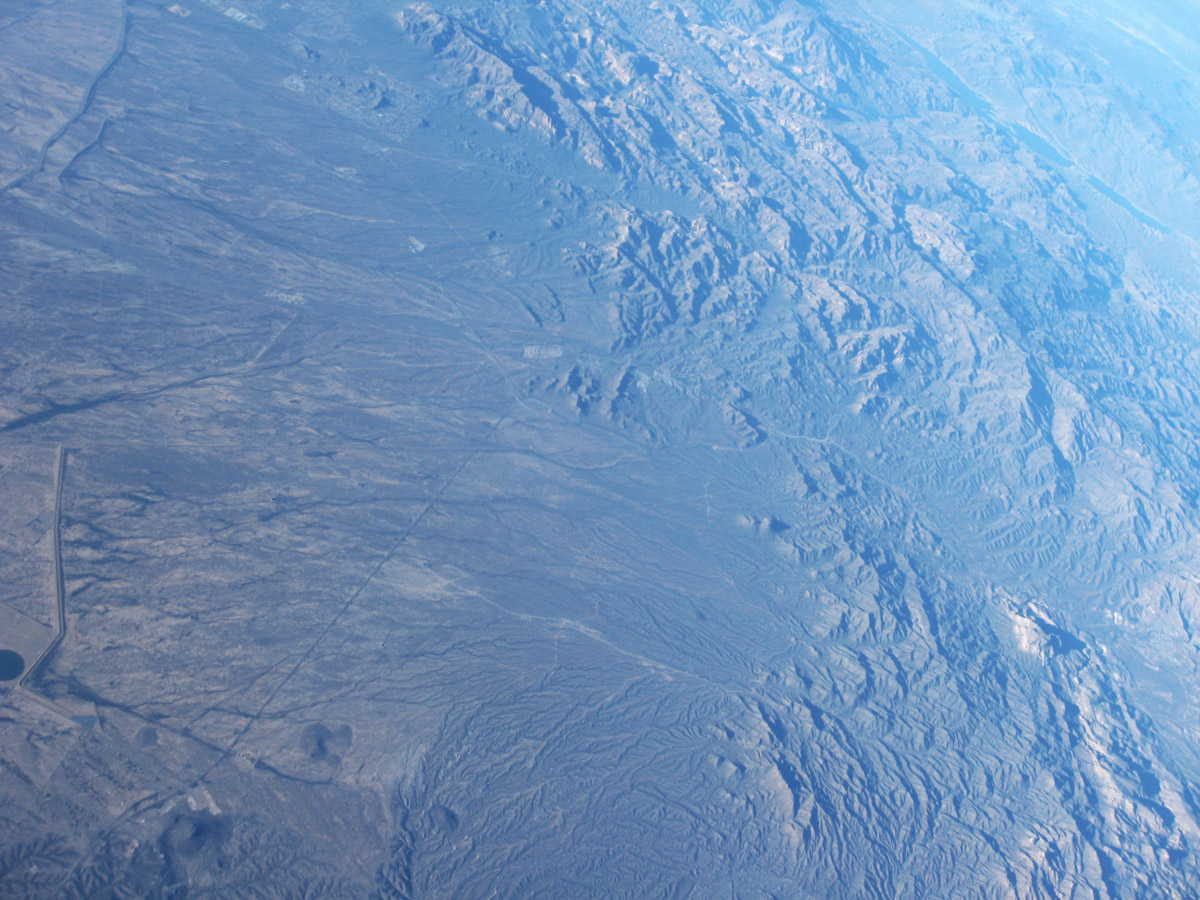 The air is getting thicker and by 61 Kft we now see the chute has opened (218 min). See the remnants of the latex balloon flapping around above it? 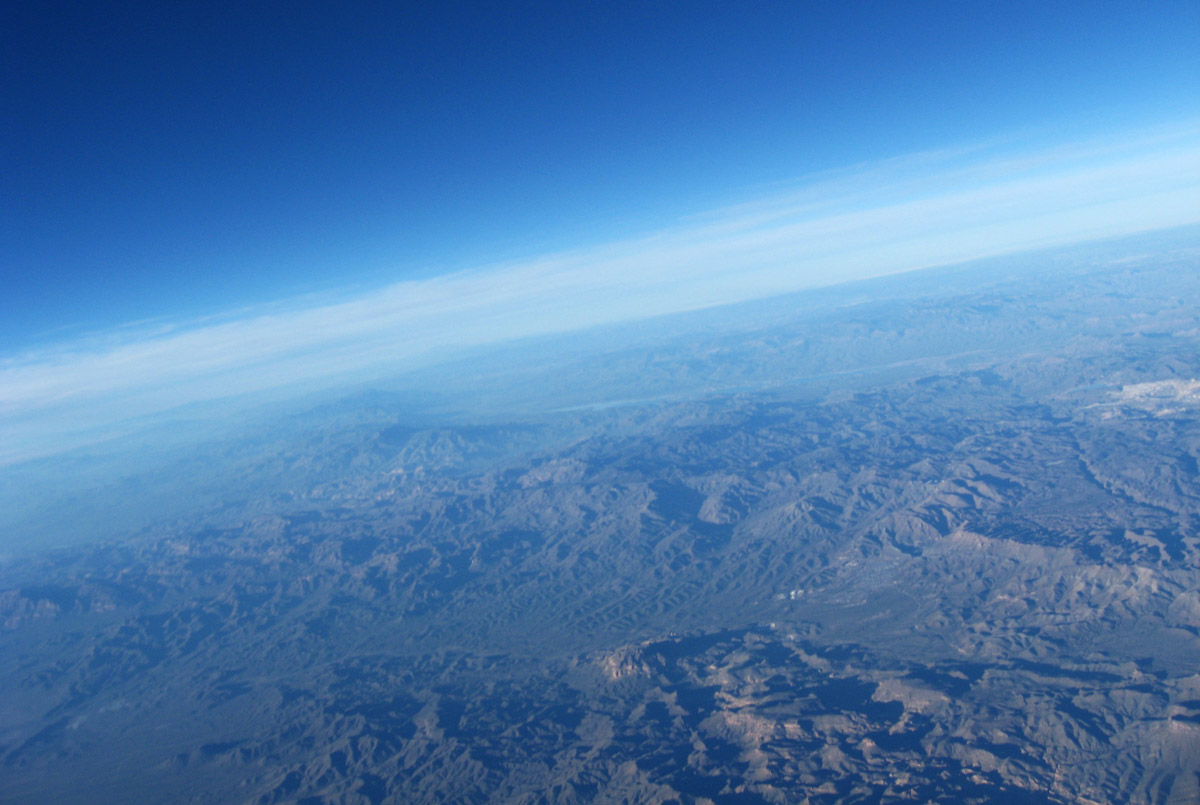 30 Kft at 228 min. If you fell out of an airliner, this is what you would see just moments before the cold, near-vacuum atmosphere did you in.

18 Kft at 236 min. Skydiving anyone? No, not yet — you wouldn’t have enough oxygen to breathe until below about 10,000 feet. Hey kids, a quiz question: would it be much different skydiving in San Diego or Denver (not talking about the scenery)? 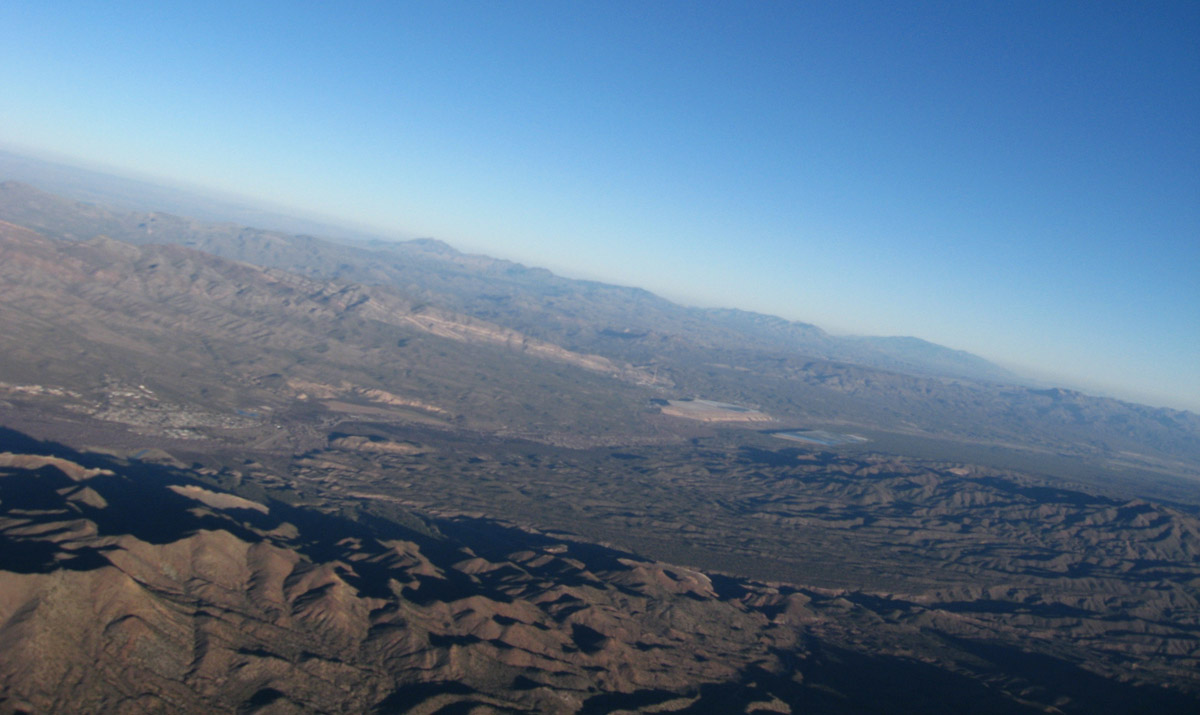 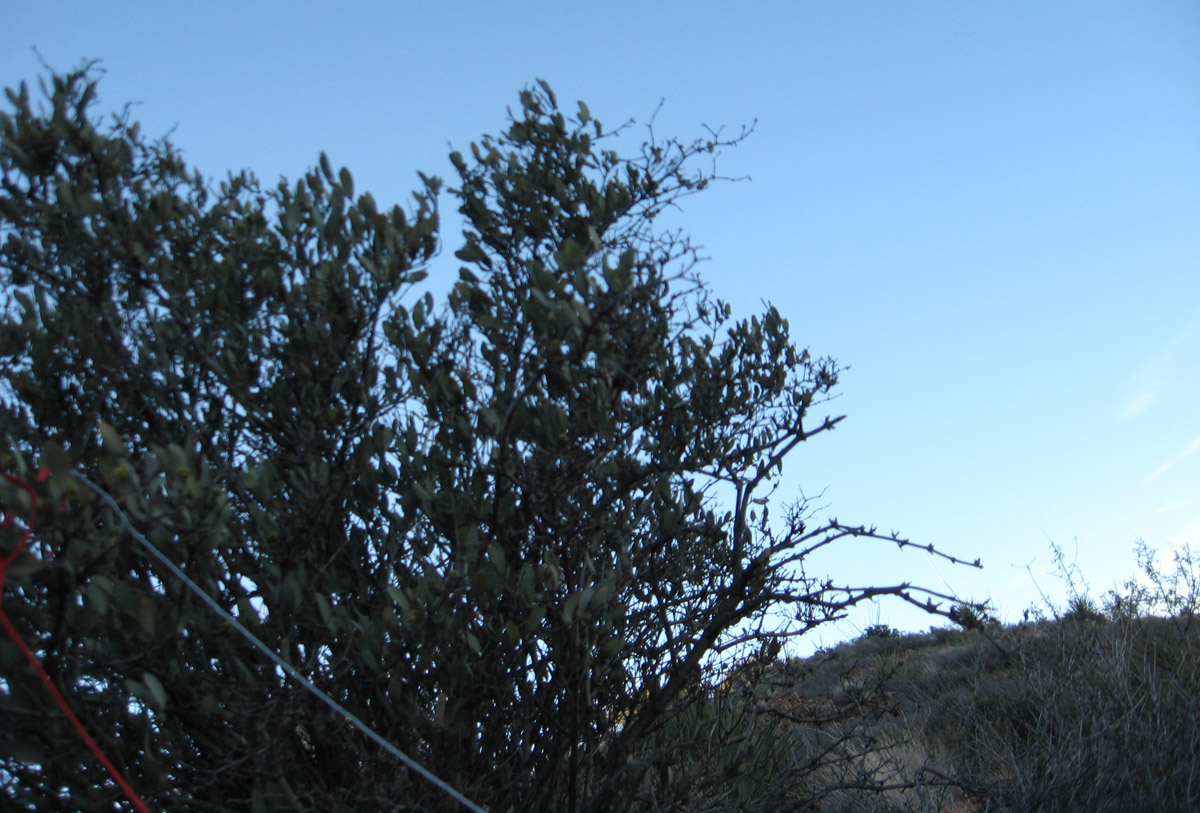 Finally back on the ground, which is at 3,434 ft MSL (after a total flight time of 244 minutes). We got lots of pictures of this bush. Our old Canon camera worked flawlessly, and ended up snapping pictures until 1:30 in the morning. The two AA Energizer Ultimate Lithium batteries were dead by morning, but it was a full 8GB SD card that stopped the photos at 1:30am.

We drove close to the landing area, and were getting APRS transmissions from the ground location (it was handy that an APRS digipeater was on Pinal Peak). Byon used his directional antennas to listen to the RDF beacon transmitters, and confirm the direction of the balloon payload. We started to hike in, but it was getting dark and we had to go back home and attempt recovery in the morning. At least we knew where it was.

We went back out in the morning, and drove in as far as we could to a corral we saw on the satellite map. This big horned beastie looked friendly enough, but we opted to back up a ways and start our hike from the other side of the cattle guard. The hike in was only about 0.8 mile but it took about an hour. 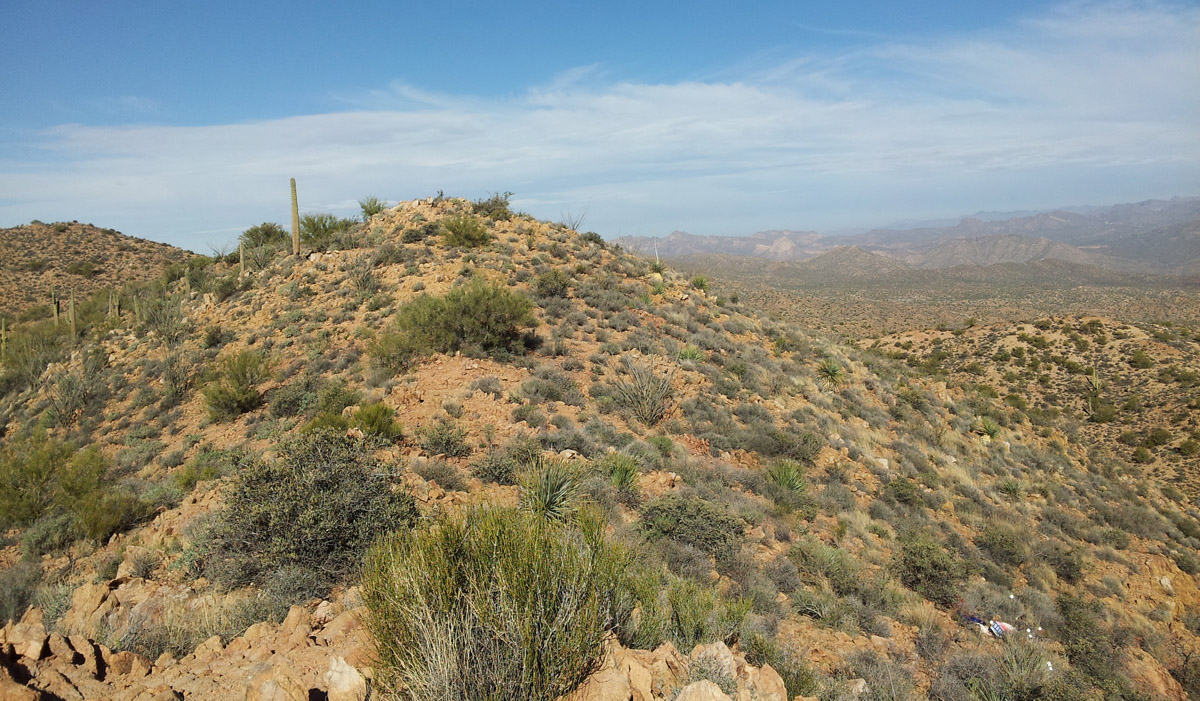 We finally found it (bottom-right of picture) — it was within probably 40 feet of the reported GPS position.

The payload was in great shape except for one broken leg on the antenna frame. The broken leg was one half of the primary APRS dipole antenna, but it still got packets out even with a goofed-up antenna. In fact, both APRS transmitters were still sending packets the next morning (we could see them online before we left). Both RDF transmitters were also going strong. 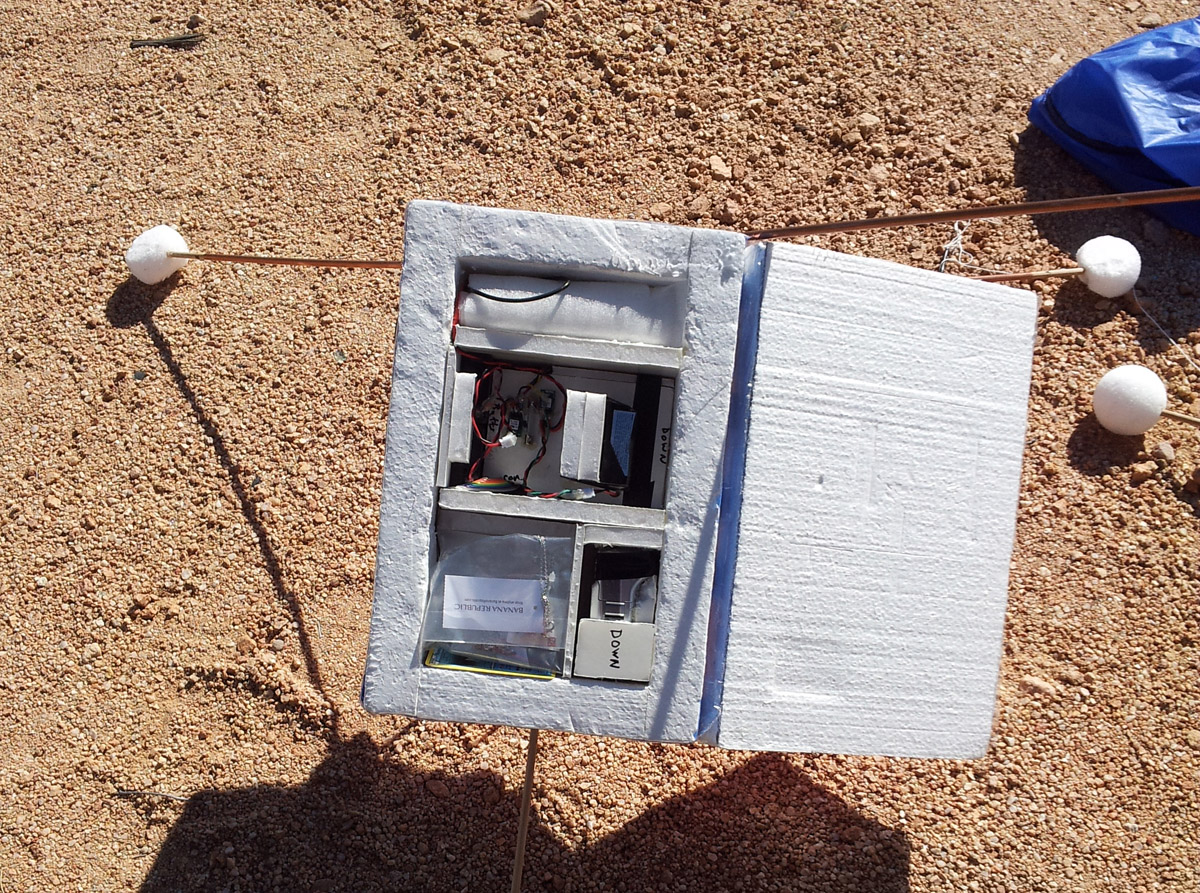 The main payload. The upper compartment holds the primary 400 mW APRS transmitter (AF7EZ-11), and the two beacon transmitters. The center houses the controller, internal sensors, and battery systems. The lower right is the camera, which faced out a hole in the side, and the lower left area holds jewelry and pokemon cards that we are giving super powers, by sending them to near space. The styrofoam balls on the ends of the antenna jack legs don’t really soften landing, but they prevent eye injuries and make the payload easier to spot.

The secondary payload, dubbed “Mini-Me,” which was suspended a few feet below the main payload. This should have been above the main payload, so as to not let the string interfere with the antenna jack, but live and learn as they say. This was an independent 15 mW APRS tracking transmitter (AF7EZ-12) with a wire dipole on the side of the box and a second GPS module and battery system. Yeah, a little 15 milliwatt transmitter — plenty of power from over 90 kft! 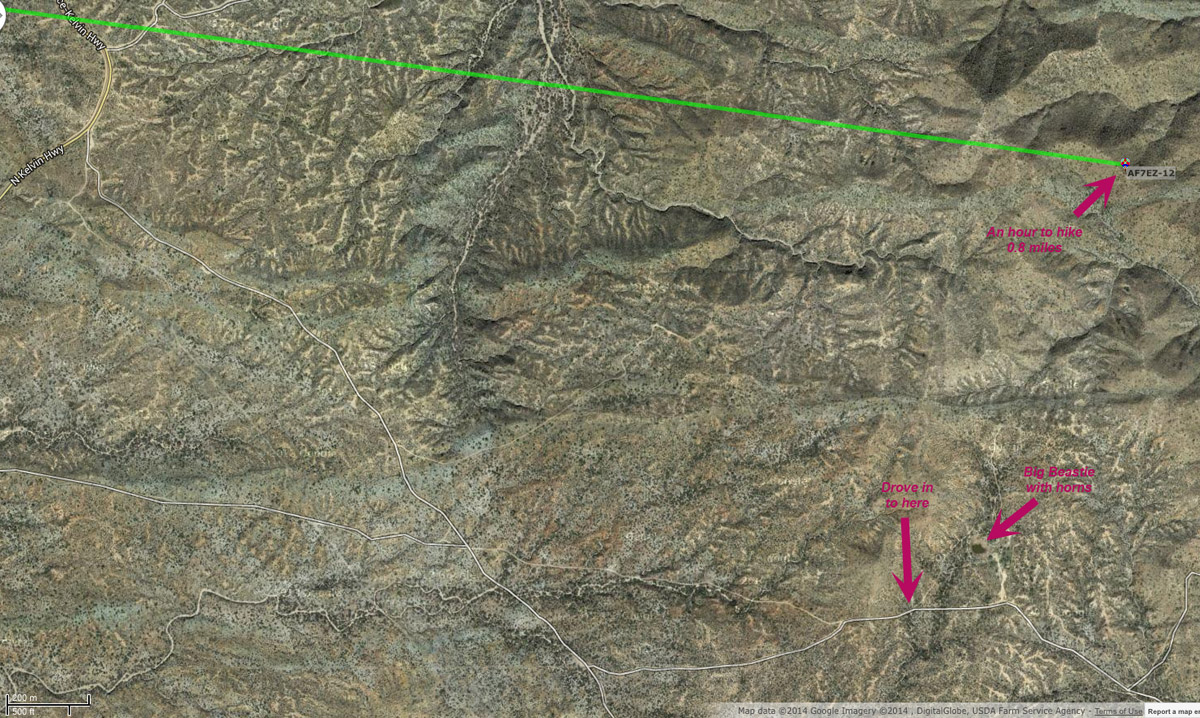 So we got to 92,000 feet! If we go again we will try for over 100K. Typical HAB (High-Altitude-Balloon) flights are less than about 120 Kft (37 km), although some special ones have hit higher flight levels.

Above are some 3D paths from Google Earth — you can zoom around with it yourself, if you’d like, using: LE-3-path.kml

And that concludes our awesome LE-3 balloon mission! Thanks for tuning-in.

I was lucky enough to be a participant in the LE-3 flight. As a non-engineer, but interested adult party I found the project to be very informative and exciting. The photos really bring the flight to life. As being part of the chase crew the balloon will eventually disappear from view to the naked eye. But as you can see, the end results of the photographs were fantastic.

Learning how the electronics are designed and constructed and learning how the RDF and APRS tracking worked was intriguing. The use of the computer flight model to predict the flight path. Filing a flight notice with the FAA, and eventually the chase and recovery (okay I was not able to go the second day for final retrieval) were all fun and very educational. This is a great project for kids and adults alike. Seriously 92,000 feet…amazing!