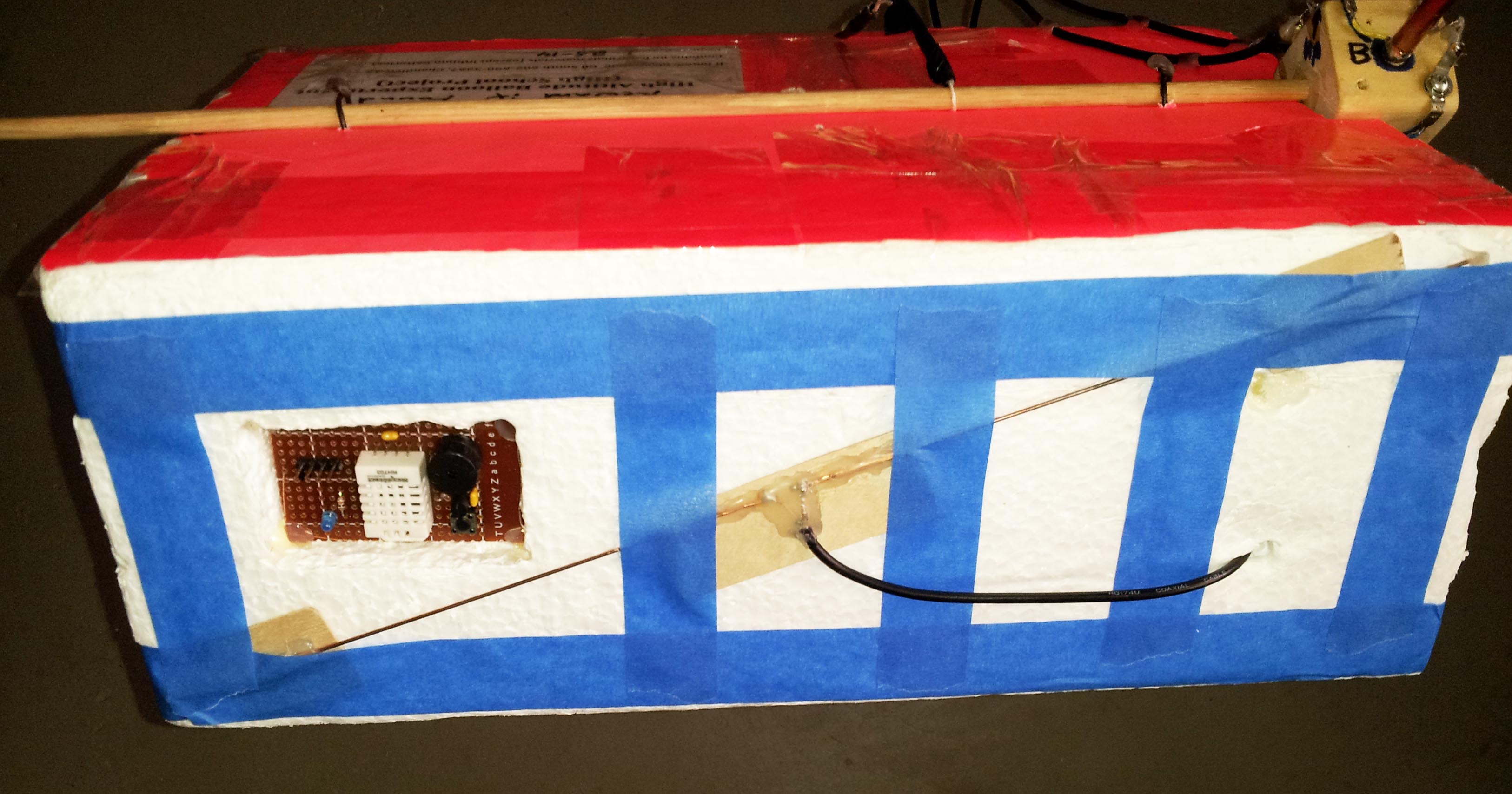 OK, just a quick payload update here — if you have followed our previous posts, you know we sent the LE-1 balloon mission to 55,000 feet, recovered the payload, and had a lot of fun analyzing the logged data and looking at the pictures. Then we sent LE-2 up to 90,000 feet, and had some sort of catastrophic failure. We lost APRS tracking telemetry during descent, at about 48,000 feet, and never did find the payload. We had a pretty good idea of where it might land, and looked over a wide area, but no joy. We were quite bummed. However, we are going to try another balloon flight: LE-3 should also go to about 90,000 feet or more.

So we need a new payload. We learned a lot during the last couple of missions, and plan to change some things this time around:

>>> We need a backup tracker. We only had one APRS tracker, and when we lost its transmissions, we were, you know (inclined plane wrapped helically around a shaft sort of thing).

>>> We need an independent beacon transmitter for RDF (Radio-Direction-Finding) on the ground after landing. We used our APRS tracker as a ground beacon, by switching it (at about 2000 feet AGL) to a different frequency and transmitting longer, more-frequent data bursts. This came in handy during LE-1 recovery, even though we were noobs and not able to home in on the location using RDF techniques, we were able to decode its transmitted GPS coordinates with our laptop. However, during LE-2, when we lost our tracker, we also lost our beacon. Even our 433 MHz chirper was turned on (and powered) along with the main tracker. Independent systems on separate batteries will be a better plan.

Some folks who have experience launching HABs (High-Altitude-Balloons) have given us some good advice also, such as:

>>> Use primary (non-rechargeable) lithium batteries instead of the rechargeable lithium-polymer batteries we used. The primary ones apparently are much more reliable at freezing temperatures. We have been poring over the spec sheets and running tests on Energizer Ultimate Lithium batteries, and will use packs of AA and AAA size (http://data.energizer.com/PDFs/l91.pdf) with switching regulators, to power different sections of our payload. These are not only designed to work down to freezing temps, but have a great capacity (AA has 3000 mAh at room temp, but we can probably get 2000 mAh out of them with our flight temperature profile, and AAA is probably good for about 700 mAh), and are pretty light. We have used these Ultimate Lithiums in the past, during FLL Robotics competitions, when we needed a flat voltage vs. time discharge for predictable precision driving tasks — they worked great.

Yes, we are off in re-design mode, and will add updates here from payload development, all the way up through the LE-3 launch, and (dare I say it?), recovery. A new, er, old, camera for the LE-3 payload.  On our last flights we had an overpriced HackHD camera (only worth half the price, IMHO), which ran way too hot for video use, and took crappy video anyway. We put it into photo mode taking pics every few seconds. While the pic quality was not that great either, we were indeed thrilled to get pics from up to 55,000 feet on our first mission. Since we lost our payload on the second mission, never did see the pics from 90,000 feet. We selected this camera for its very light weight, small size, and 1080p video specs. However, just because a camera has 1920×1080 progressively-scanned pixels, and can call itself 1080p, does not make it “high-def.” The video was grainy and rather colorless, and the compression artifacts during any motion were truly awful. The provided lens was way too wide-angle. It is hard to believe that so many folks could have given good reviews to this camera. We will not be getting a replacement.

Lots of other folks like the even-pricier/heavier GoPro family, but sample video we saw was not that particularly impressive. Besides, we really don’t want video anyway. After a few seconds of the camera swinging around it just gets boring. Now, an up-facing video camera capturing the balloon burst would be cool, but just some decent horizon/ground pictures are enough for us.

So we heard about this project called CHDK (Canon Hack Development Kit) (http://chdk.wikia.com/wiki/CHDK) which is a wonderful gift to the photography community from a bunch of folks who wanted to get more features out of modest Canon cameras. The feature set is incredible, but the thing we need is the ability to run a camera script for an “intervalometer,” aka “time-lapse,” aka just taking pics every x-seconds until the batteries die or the card fills up.

As much as we would love to fly a good full-frame dslr with a nice L lens on the balloon, we can afford neither the weight nor the potential loss. However, digging in the junk basket, down to a stratum layer that is about circa 2007, we found an old Canon A560 point-n-shoot. Not tiny or super-light, but workable and free. Only 7MP, but takes decent pics. Much better lens than what we were using. Takes two AA batteries. And, it is on the CHDK list of ported code (a new A1400 would have been great but is not ported yet). Time to figure this out — a few hours later, we were adept at loading CHDK, and running a script we found that let us snap pics at a specific rate (and conserve batteries by keeping the lcd off etc).

We set the camera on a tripod outside, put a clock with a second hand across the yard (just to be sure the times were accurate), installed two new Energizer Ultimate Lithium AA batteries, loaded CHDK and started the script, snapping a picture every five seconds. We expected maybe 500 pics. We would have been happy with 800 pics, and thrilled with 1200. So how many pics did we get? The camera ran for 4 hours and 54 minutes, and took 3531 pictures! The batteries were not dead yet, but we had filled up the few GB available on the SD card. Sheesh, that’s awesome. In cold weather the battery capacity will drop, but may work just fine for perhaps 1500 pics, which if taken every ten seconds, gets us over four hours of operation time. That’ll work. The camera may stop working in the cold as well, as it is only rated down to 0 C, but the price was right so we’ll give it a whirl.

We needed to choose the camera first, so we have a weight and size with which to work. We can now get going on a new styrofoam payload box.